Patronat d’Estudis Osonencs is an academic society founded in Vic in 1952 that continues the cultural tradition of the city of Vic and Osona region, driven earlier by the Literary Circle of Vic (1860), or the Archaeological Society (1882). The Association has as institutional aims to promote, guide and coordinate scientific research, arts and letters and protect the cultural, artistic and monumental heritage of the Osona’s region.


Groups and others: Contact by mail to info@patronatestudisosonencs.cat EN

At some time between the first and second centuries A.D., a Roman temple was built in one of the highest places in the area that is today occupied by the city centre of Vic, in the heart of the Ancient Roman Auso. The building was located in a peribolo or a sacred temenos, where citizens met, and where offerings and ritual sacrifices were made. The temple was most probably dedicated to the gods of the Capitoline triad or to the imperial cult. In the time of Emperor Trajan, Auso possessed an ordo decurionum, a group of people who were responsible for the administration of the municipality, while we also know that there was a collegium in charge of the imperial cult. At the end of the 4th century, and probably as a result of the adoption of Christianity as the official religion of the empire, and the prohibition on worshipping pagan divinities, the temple was used for other kinds of public services. 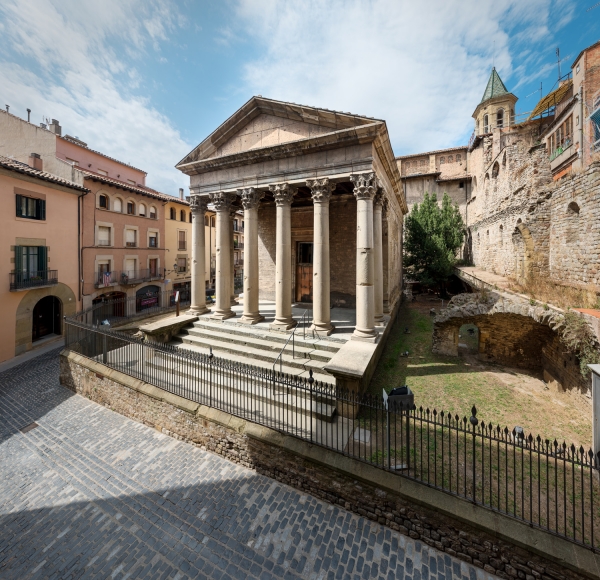 The site was possibly an area that was used throughout late antiquity and during the era of Visigothic rule, adding to the centre of power that extended to the area today occupied by the cathedral and the episcopal palace. The role of the site during the Islamic presence of 796 and 824 is unknown. In the last quarter of the ninth century, after the reorganization of the county of Osona by Wilfred the Hairy, documents cite the existence of a tower and a castle with androna on the site of the ancient temple. This castle came under county control, and from the 11th century it became the seat of the jurisdiction of the Montcada family over the city. In 1356 its domain was ceded to Viscount Bernat III de Cabrera, which provoked the opposition of the bishopric and the beginning of a series of conflicts and lawsuits, until the Councillors of Vic purchased it in 1448 and used it as a municipal property. 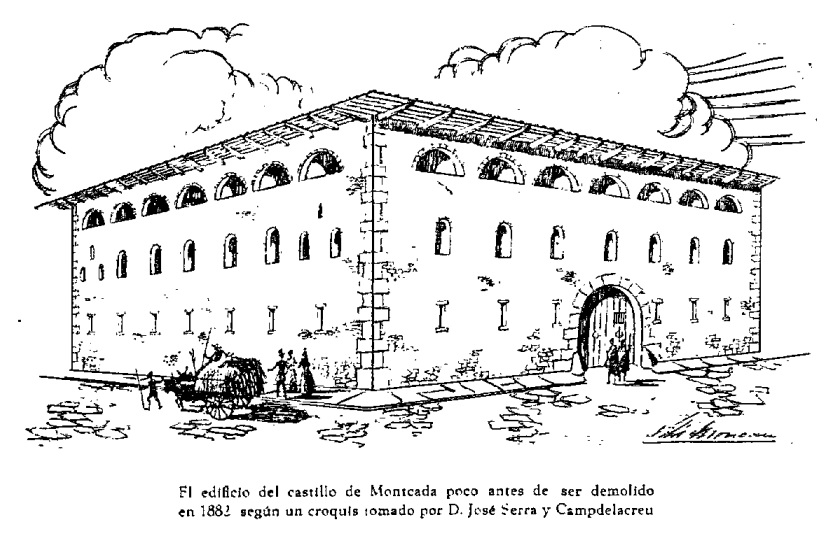 As such, during this medieval period, the site was occupied by the castle or the palace of the Montcada family. This building comprised an interior patio that was flanked by the walls of the now-vanished Roman temple; and, around it, by a structure consisting of three floors with several arched ceilings. Throughout the centuries, the building underwent numerous renovations, and served as the home of the veguer (a feudal military commander), a city granary and as a municipal jail. The Roman remains were not discovered until 1882, when demolition work began on the old medieval castle. A group of prominent men in the city then acquired the site and sponsored the restoration of the temple, which later became a lapidary museum and later the headquarters of the Patronat d’Estudis Osonencs.

The Roman Temple of Auso was built from sandstone, which was probably extracted from the quarries of the neighbouring municipality of Folgueroles. The building was erected in accordance with the indications of Vitruvius: it was a prostyle temple - with columns to the front - and with an east-facing portico. With respect to its construction technique (with the use of opus africanum) it shares similarities with the temples of Dougga or Bulla Regia (in Tunisia). It measures 19 metres in length by 10 metres wide, and is 11.5 metres high. The basement and the part of the northern and west facing wall are original, while almost all of the original architrave has also been preserved, although the eastern wall and the southern wall have required reconstruction. 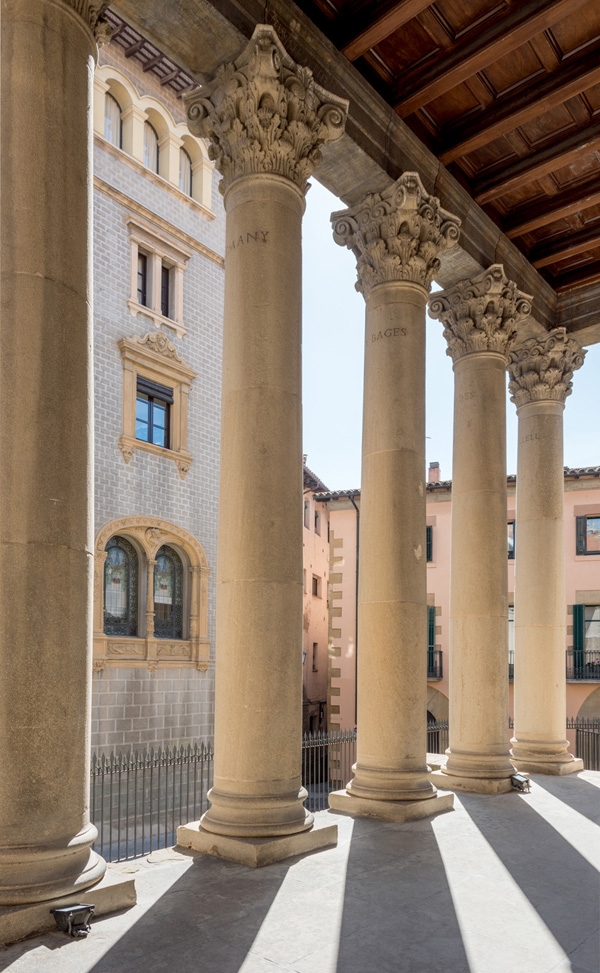 The colonnade, which was built on top of a staircase with seven steps, was restored in 1930, while the pediment and the roof were restored in 1957. The decoration of the frieze was decorated with geometric chequered motifs, as can be seen in those fragments that were recovered. By way of contrast, the stem of the original columns was smooth (as can be seen in the only original fragment, which forms part of the first column on the right) and were topped with Corinthian capitals. An original capital is conserved at the top of the pilaster on the right angle of the front wall of the cell. The eight columns are dedicated to different characters from the city of Vic who had a prominent role in the recovery of the temple and in the cultural Renaissance of the 19th century, among whom was Josep Serra and Campdelacreu, the driving force behind the restoration of the temple.

The walls of the cell, which measures 12.10 m by 10.10 m on the outside and 10.9 m by 9 m on the inside, were covered at the height of the architrave by a roof that was supported by three large beams or girders. The walls preserve the frame structure that once secured a plaque and also the remains of lime plaster, which means that it was probably decorated. 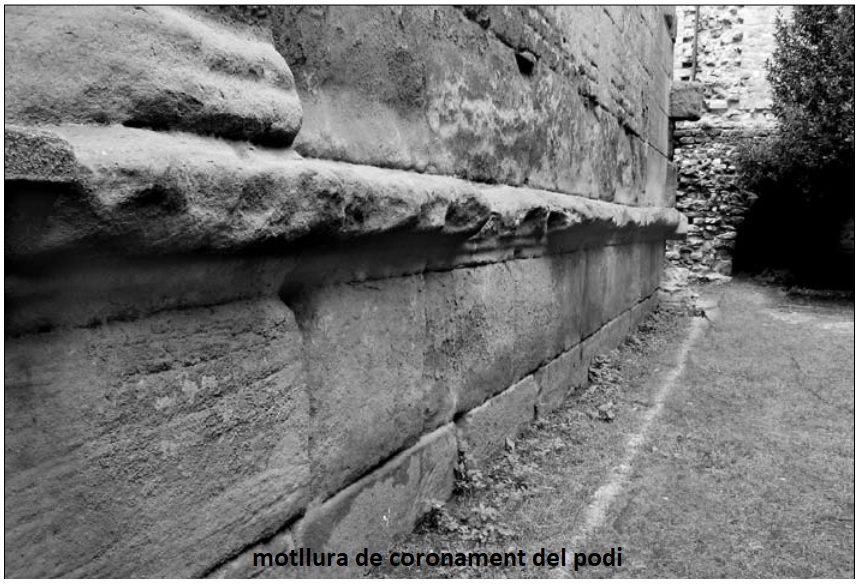 The 1.5 m high podium has been partially excavated on the hill formed by gravel and marl from which the temple rises, and it still retains some of the foundations, with well-worked blocks that even today show the stonemason’s marks. This podium has a pronounced cornice and an access was opened to the south, at an unknown time. The archaeological work undertaken revealed a level made with Roman material before the construction of the temple, around I BC, dating its construction between I AD and II AD, although other authors place the construction of the temple as being at some time in the second century AD.

THE CASTLE AND THE PALACE OF THE MONTCADA FAMILY

The entire castle, whose existence has been recorded since the end of the eleventh century, appears to have been associated with the old church of Sant Sadurní, which may have served as a castle chapel. The castle is an almost square in construction, with lower floors and two floors centring on a courtyard and a central well. The lower rooms retain several loopholes and were covered with a barrel vault more than 1.20 m wide. The first floor, which was also covered with a barrel vault, had flared openings, while those on the second floor were formed by a row of arches, although at first they could have been formed by battlements. Embedded in the wall that joins the church of la Pietat is an engraved stone that reminds us that King Jaime I, as he himself recounted in his chronicle, visited the Castle of the Montcada in 1231, after the conquest of Mallorca. 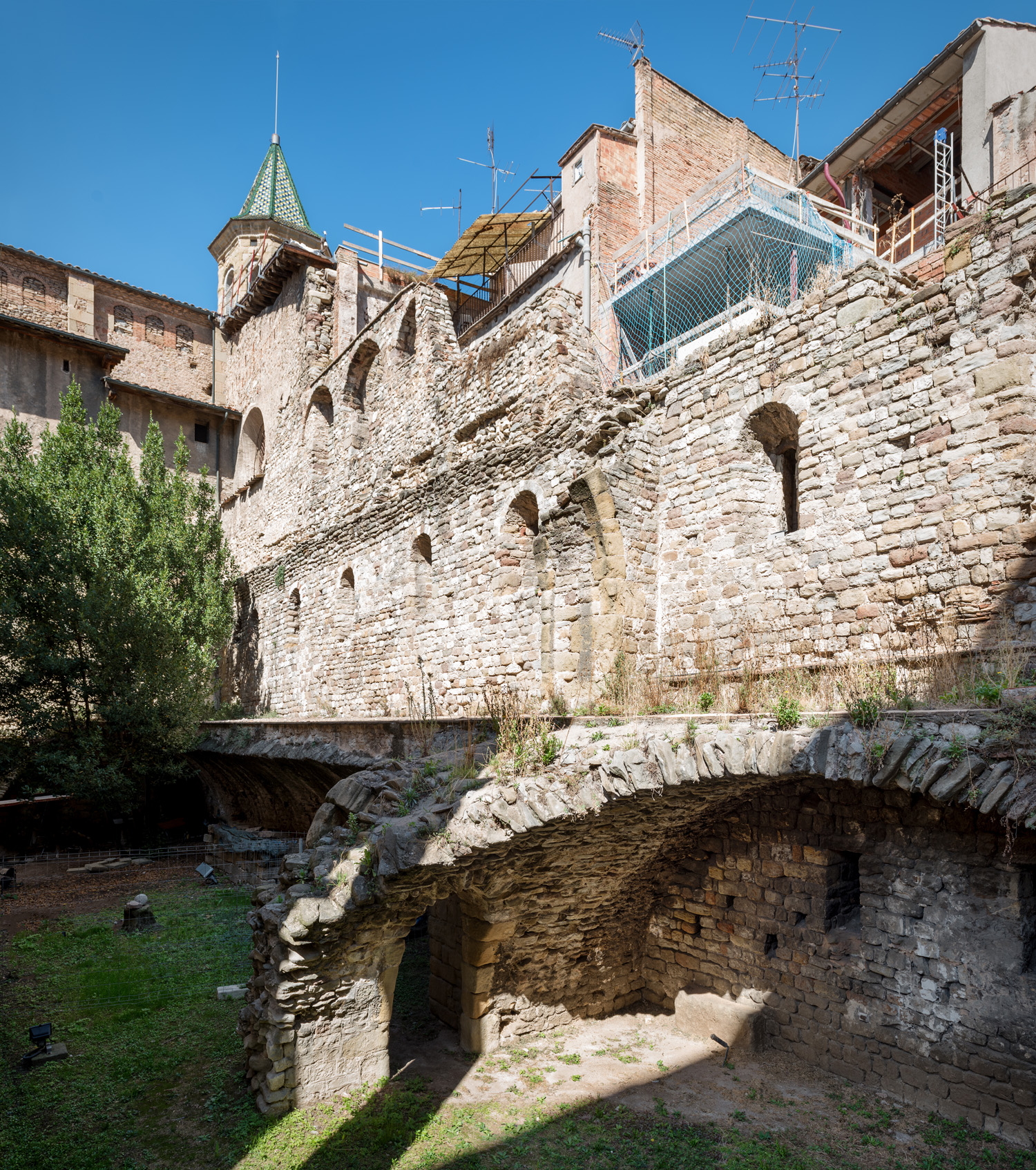 With respect to the site, a machicolation (or murder hole) and a door for horsemen, located parallel to the street of Carrer Cardona are notable. It is on this more northern side that archaeological works have uncovered several paved floor surfaces and walking levels from the 13th century onwards; also documented are important renovation works that were made throughout the seventeenth and eighteenth centuries with the aim of gaining space. In the southernmost part, the main discoveries are associated with the remains of the medieval walls, and with the necropolis of Sant Sadurní, which are well-documented in the neighbouring Plaça de la Pietat.

LOCATION - TO GO TO